When it comes to Ancient Egypt we have a lot to appreciate and talk about, and it probably comes as no surprise that they were quite the beauty enthusiasts; always looking for an idealised version of themselves. Both men and women used to wear makeup like red ochre (as lipstick and cheeks stain), kohl (our beloved cat eye comes from there), burnt almonds (to fill out their brows), henna (as a skin detail and to dye their nails yellow and orange), perfume and practiced beauty rituals. Not only to enhance their appearance, but they also believed that they had magical and religious powers. Many of these beauty secrets involved oils, honey, milk and the Dead Sea salts to combat wrinkles and preserve their youth, as well as hygiene and skin hydration.

Probably, for many of us, one of the first things that we are reminded of when gathering the words “beauty” and “ancient Egyptians” is the figure of Cleopatra. Over the next two thousand years and counting, she would be remembered not only for being the last of the Pharaohs but also for her alluring physical beauty, her seduction powers and beauty secrets. Today, I’ve listed to you my Top 5 Cleopatra’s Beauty Secrets.

This one I can say from self-experience that it’s wonderful. I love using Rose Water as a Toner because it’s a very effective first layer in my beauty routine, making my skin soft, smooth and hydrated. I don’t like the idea of using any harsh alcohols and chemicals, which many toners in the market contain. Also, Rose Water is a great option to spray on your face in hot summer days in order to refresh your complexion.

One of her most famous skin regimens was taking a bath filled with the fresh milk of a donkey, honey, and sweet almond oil. The lactic acid exfoliated and rejuvenated the skin, while the honey and the sweet almond oil were the ones responsible for hydration and sweet smell. Of course that jumping into a bath containing milk and honey doesn’t sound all that great, but since I’m all about trying new things I’ve made an experiment on a bowl filled with water, 130 ml of coconut milk, honey and sweet almond, and well… my hands felt and looked extremely soft, moisturised and nourished. Nice one, Queen Cleo!

Cleopatra was also known for her dazzling smell. Rose and Jasmine, the two rarest kinds of essences, were her favourite fragrances and actually they’re mine, too. I’ve got my Rose and Jasmine Essential Oils and I quite enjoy dabbing one drop behind my ears and another one over my wrists. And trust me, you don’t need more than one drop. If you love the smell of other kinds of oils and essences, like Lavender, you can do the same thing and create yourself a signature fragrance. 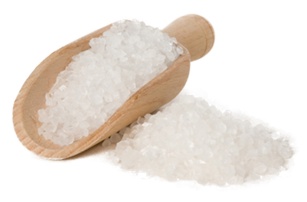 Even Cleopatra knew that the secret to a beautiful looking and healthy skin is exfoliation. For that purpose, she used the Dead Sea salts, known for their natural healing properties that replenish essential minerals lost during daily activities.

Cleopatra is often remembered for her love affairs with the two most powerful men in the world on that time, Julius Ceasar and Mark Anthony, so it has been assumed that she had to be mesmerizingly beautiful in order to seduce and make them fall in love with her. But that isn’t what historical information tells us and honestly, we all know that physical beauty isn’t the most important thing when it comes to making ourselves memorable. And certainly only a pretty face and a young body weren’t reason enough to bring Julius Caesar and Mark Anthony, both womanisers, to become so involved with her, love and worship her as a goddess.

According to historical and archaeological studies, Cleopatra was portrayed as having quite normal facial features and sometimes even masculine. But she was incredibly intelligent. Educated in mathematics, philosophy, oratory and astronomy, and spoke as many as 12 languages. Also, one of her biggest charms was the tone of her voice. Roman historian Cassius Dio describes her as having “the most delicious voice and a knowledge of how to make herself agreeable to everyone.” Greek historian Plutarch wrote that Cleopatra “had an irresistible charm, and her presence, combined with the persuasiveness of her discourse and the character which was somehow diffused about her behaviour towards others, had something stimulating about it.” He also wrote: “there was sweetness also in the tones of her voice; and her tongue, like an instrument of many strings, she could readily turn to whatever language she pleased.”

It seems clear that Cleopatra’s allure had little to do with her physical appearance, but she was charming, daring and through her wit, inner confidence and intellect she captivated not only two of the most powerful men in ancient history but also the imagination of the entire world for all the centuries that followed. It’s an important lesson for our modern society, so fixated on the physical perfection, that the most renowned beautiful woman in human history was, in fact, more beautiful in character than in physical appearance.

Many kisses and see you soon! 🙂